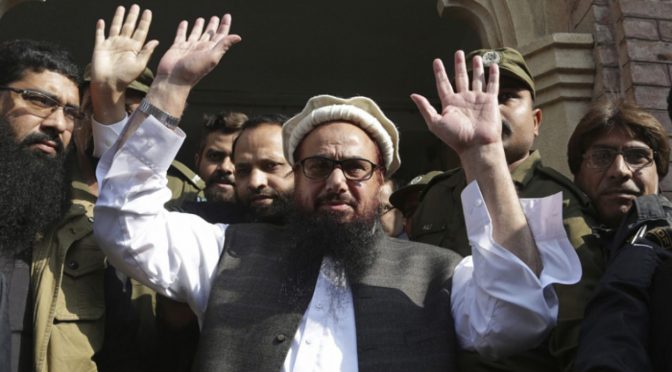 Jamaatud Dawa (JuD) chief Hafiz Muhammad Saeed was on Wednesday arrested in connection with a terrorism financing case while on his way from Lahore to Gujranwala, officials of the Punjab Counter-Terrorism Department confirmed.

According to a spokesperson for CTD Punjab, Saeed was sent to prison on judicial remand after the counter-terrorism department presented him before a Gujranwala anti-terrorism court (ATC).

The CTD has been directed to complete its investigation and submit a charge sheet to the court in the stipulated time.

Earlier, according to CTD sources, Saeed was arrested by CTD Punjab in the Gujranwala jurisdiction while he was on his way to an ATC in Gujranwala to seek bail.

A JuD spokesperson also confirmed the arrest to Reuters.

On July 3, the top 13 leaders of the banned JuD, including Saeed and Naib Emir Abdul Rehman Makki, were booked in nearly two dozen cases for terror financing and money laundering under the Anti-Terrorism Act, 1997.

The CTD, which registered the cases in five cities of Punjab, declared that the JuD was financing terrorism from the massive funds collected through non-profit organisations and trusts, including Al-Anfaal Trust, Dawatul Irshad Trust, Muaz Bin Jabal Trust, etc.

These non-profit organisations were banned in April as the CTD during detailed investigations found that they had links with the JuD and its top leadership, accused of financing terrorism by building huge assets/properties from the collected funds in Pakistan.

On Monday, a Lahore High Court division bench sought replies from the Ministry of Interior, Punjab home department and CTD on a petition filed by JuD chief Saeed and his seven aides challenging an FIR carrying a charge of terror financing.

In February, Paris-based Financial Action Task Force (FATF) had warned Pakistan to deliver on its commitments to curb terror financing and money laundering.

Risks to the global financial system have virtually put the country’s entire machinery into an aggressive mode to show tangible progress within two months of the warning.

While the meetings were taking place, the government had announced a ban on JuD and Falah-e-Insanyat Foundation to partially address the concerns raised by India that Pakistan supported these and six similar organisations, including Jaish-e-Mohammad (JeM) or at least considered them low-risk entities.