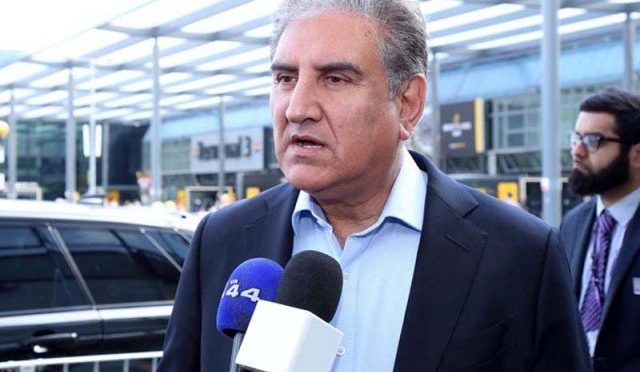 Foreign Minister Shah Mehmood Qureshi was greeted by empty seats at a media conference in London as journalists protested over ‘free speech concerns’ in Pakistan.

Qureshi, who is in the British capital on an official visit, attended the #DefendMediaFreedom conference with journalists posting videos of a nearly deserted hall.

Qureshi was questioned about the censorship in Pakistan.

“Believe you me, there is no question of gagging or controlling media,” he told the conference co-hosted by Britain and Canada.

The foreign minister also had a heated argument with a Canadian social media activist at the event after the latter accused him of getting his Twitter account blocked on Islamabad’s complaint.

In the video footage, which went viral, it can be seen that the Canadian man says: “You censored me, I had a Twitter account here [in Canada].”

“My tweet produced Pakistan’s blasphemy law and your government had my account taken down, so can you tell me why your Islamic supremacy in Pakistan is silencing my journalistic freedom in Canada,” he added.

“You sir should be ashamed, who are you to silence me in Canada…. Answer? You don’t like free speech,” the journalist roared at the foreign minister.

FM Qureshi responded by saying: “First of all you want your sentiments to be respected but look at the tone in which you are speaking….. Is that the correct way?”

The minister said that he did not block his Twitter account. “You have double standards and what you are propping up a certain sections agenda. I have been respectful to you.”

Quite embarrassing exchange with Shah Mehmood Qureshi in London today in the #DefendMediaFreedom conference. pic.twitter.com/moNk42sIVs