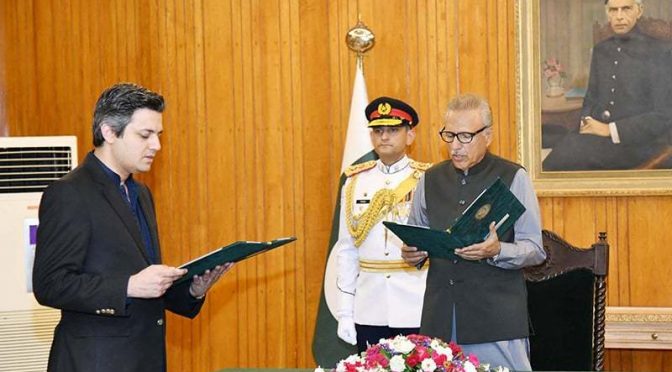 The portfolio of federal minister for Revenue Division has been taken back from Hammad Azhar a day after he was appointed to the position, it emerged on Wednesday.

nstead, Azhar has now been appointed the federal minister for Economic Affairs Division, according to a notification issued by the Cabinet Division.

On July 8, a notification issued by the Cabinet Division had revealed that Azhar, the former minister of state for revenue, had been appointed the federal minister for Revenue Division. Azhar’s ascension had meant that Dr Hafeez Shaikh, the adviser to the prime minister on finance, revenue and economic affairs, no longer held the portfolio of Revenue Division adviser.

However, in a “partial modification” of its July 8 notification, the Cabinet Division on Tuesday announced that Prime Minister Imran Khan has now appointed Azhar as the federal minister for Economic Affairs Division, while Dr Shaikh has been restored to the office of Revenue Division adviser.

As per the latest update, Azhar and Dr Shaikh hold the following offices:

The Cabinet Division said its previous notification about Azhar being appointed the federal minister for Revenue Division “may be treated as withdrawn”.

The change in Azhar’s role came after Dr Shaikh expressed reservations over the withdrawal of the Revenue Division portfolio from him, according to credible sources.

In June, Azhar had presented the PTI government’s first annual budget in the National Assembly.

While addressing the NA, Prime Minister Imran had lauded and praised the minister for his “composure” and the manner in which he conducted the budget session, announcing: “He has now earned the federal ministry for himself.”

According to his profile on the Federal Board of Revenue website, Azhar graduated with a bachelors degree in Development Economics from the University of London’s School of Oriental and African Studies.

He then completed his postgraduate diploma in law from the BPP Law School in London. He enrolled for the Bar Vocational Course in 2004 and was formally called to the Bar at The Honorable Society of Lincoln’s Inn in 2005.