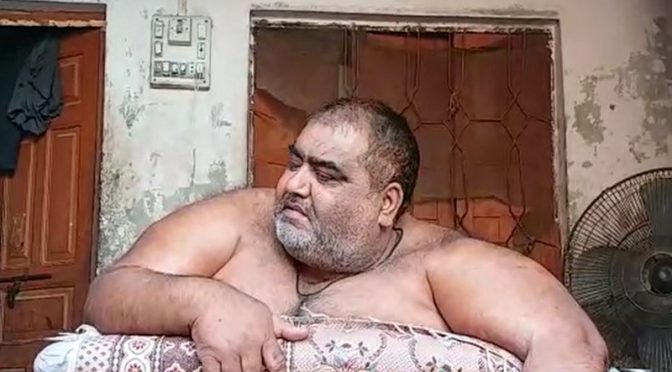 Noor Hassan, a victim of obesity, weighing in at 330 kilograms has passed away today.

The Sadiqabad resident passed away after being hospitalized for three weeks at a private hospital in Lahore.

Considering his appeal to help him with his treatment, the Army Chief Qamar Bajwa issued special instructions for his treatment and sent an army helicopter to transfer him to Lahore.

According to sources, the 60-year-old had been in the ICU for the last 10 days, following an operation.

After the operation, the doctor tending to Hassan’s case – Dr Muaz –  had a conversation with the media. He explained that doctors were working to the decrease layers of fat on Hassan and that his weight would go down by 200 kilograms in the next 2 years.

Dr Muaz told the media that after losing 25 kilograms, in a month, Noor Hassan would be able to walk on his own, without any kind of support.

Furthermore, he added that Hassan would be discharged from the hospital after 20 days, however, he passed away only after 3 weeks.