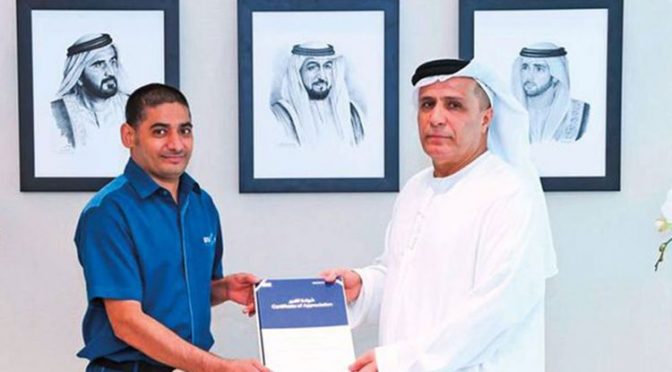 A Pakistani cleaner in Dubai has won over hearts for his honesty after returning a bag containing 15 kg of gold worth 7 million dirhams.

“Honesty is the biggest wealth”, remarked Taher Ali Maqbool, 27,  while being honoured by the Roads and Transport Authority (RTA) as reported by the Khaleej Times.

“You cannot buy honesty even with one crore rupees. Wealth is not permanent; it is with you today and tomorrow it belongs to someone else,” he said.

According to the honest expat, his father’s advice not to earn anything through dishonest means rang in his mind when he opened the bag and found solid gold bars inside. “I had no clue the bag contained gold. I thought it would be tools or something when I spotted it in a corner. I informed the security guard and returned the bag without thinking twice.”

Ali was on night duty when he found the bag at the parking facility in Al Sabkha area earlier this month. Nobody has claimed the bag yet.

The expat, who hails from the Chakri village in Sialkot, said congratulations are pouring in from his family members after he posted about the incident on his Facebook page.

“When I told my father, he said I did the right thing and congratulated me. That meant a lot to me.”

Ali has been working for the company since 2013 and is the sole bread winner for his family. “I came to Dubai to support my family and my father, who is not well. I do not have big dreams except to build a proper house for my family.”