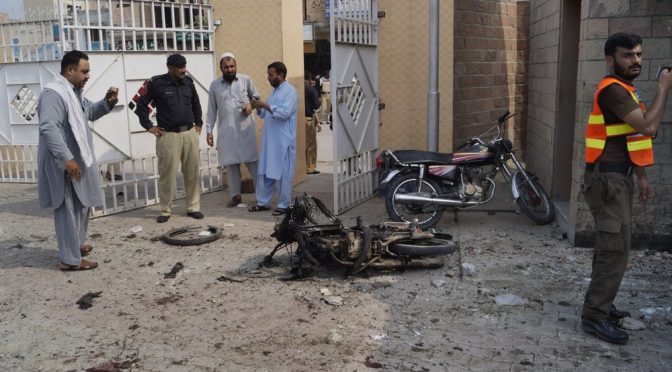 Dera Ismail Khan    –   At least nine people, including six police personnel, were martyred and around 30 others injured in two connected terror strikes on Sunday near Dera Ismail Khan city of Khyber Pakhtunkhwa.

The first attack was carried out at a roadside checkpoint near Kotla Syedan village in the outskirts of the town wherein four bike-riding militants opened fire on two on-duty policemen, Constable Jahangir and Constable Inam, killing them on the spot.

When the bodies of the slain policemen were brought to the district hospital, a burqa-clad woman suicide bomber, already sitting there, targeted the people who gathered around the ambulance outside the trauma centre of the hospital.

Seven people, four of them policemen and three civilians, were martyred and around 30 injured in this subsequent suicide blast. The seriously injured people were shifted to the Combine Military Hospital.

The woman bomber, aged around 28 years, came on foot and blew herself up,” said district police chief Saleem Riaz. He said that 7 to 8kg explosive material was used in the bomb.

The officer feared rise in the death toll as a number of the wounded were in critical condition. He said that the policemen deputed at the entry of the hospital carry out searching and frisking of the visiting men but females are exempted from body search due to the tradition and customs of the area.

Officials said the suicide bombing by a female extremist was first ever and an unexpected incident in the region.

TTP Spokesperson Muhammad Khurasani in a statement claimed responsibility for the attacks, saying these were carried out as retribution for the killing of two Taliban commanders by counter terrorism police around a month ago. But he denied the suicide bomber was a woman.

But another policeman insisted the suicide bomber was a woman. He said the mutilated head of the bomber was recovered and sent along with pieces of her hairs and feet for forensic examination.

Officials at the Combined Military Hospital (CMH) said five dead bodies and at least 30 injured people have been brought to the medical facility.

Prime Minister Imran Khan, who is on an official visit to the US, strongly condemned the terrorist attacks, and expressed grief over loss of lives. 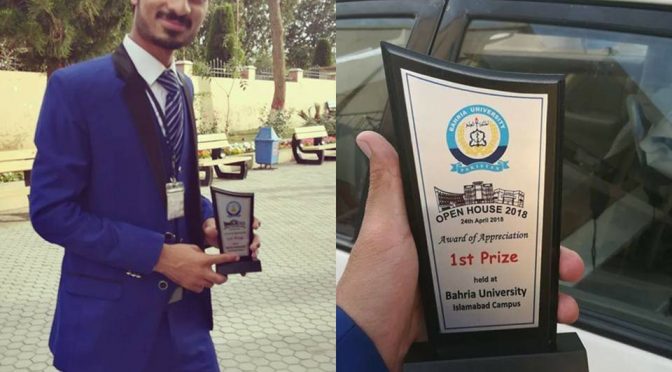 Saqib completed his bachelors but could not get a degree because he failed to complete one subject. Out of 48 he passed 47 and attempted to pass the last subject in an extra year but still bad luck struck him and failed the subject again.

Due to peer pressure, he could not cope up with the society and blamed the teachers and took his own life on 7th July 2019 at 1:52 AM.

He spent almost 5 years (10 semesters) in the university far away from his family in order to pursue education. As he was about to complete his degree but was given F many times in the same subject i.e. Differential Equation that made him depressed.

He lost courage and scarified a beautiful life. A regret that we have built a society based on extreme frustration. Every next academic step seems an impossible task, every teacher victimizes and with all these you have got no place to ventilate yourself.

A Dream Died, A Hope lost, a Family Heartbroken at the expense of an unstable educational system.