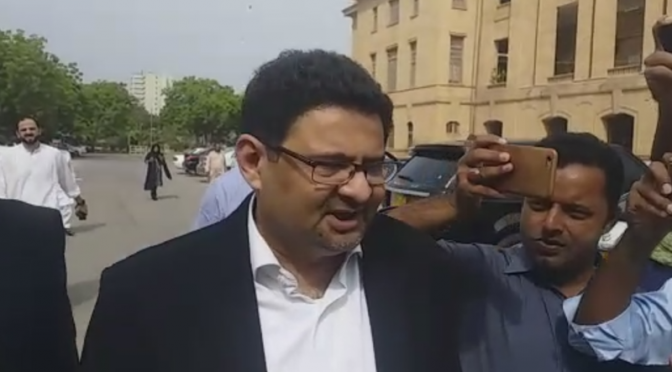 Ismail reached the courtroom after submitting the bail application.

In an informal conversation with media, the PML-N leader said there was no need for NAB to conduct raids, adding that he had received notices after 3pm yesterday. He said whenever the accountability bureau had summoned him, he had appeared before it.

A NAB team is also at the SHC premises today, where Ismail and former managing director of Pakistan State Oil Sheikh Imranul Haque, for whom arrest warrants were also issued, are present.

Hours after the arrest of the former premier, NAB officials had raided Ismail’s residence in Karachi’s DHA but returned empty-handed as the former finance minister was not found at home.

Though there was no word from NAB officials about the motive behind the raid and its link with Abbasi’s arrest, a senior leader of the PML-N, Mohammad Zubair, said that personnel of the anti-graft watchdog had searched Miftah’s residence.

“I went to his [Miftah’s] house when I came to know that there were NAB officials outside the residence,” Zubair told Dawn. “At around 6:30pm NAB officials with women personnel went inside his house and carried out a detailed search. He was not there. He has not been in contact with his family or any PML-N member as his phone has remained switched off since afternoon. We and his family are concerned about him and no one yet knows his whereabouts.”